As the US Federal Reserve hiked the rates, Bitcoin reversed its losses, to gain 7 percent. The Rate Hike by the Federal Reserve had a low influence on the market. On Sunday Ethereum topped the Three thousand and one hundred dollar mark while Bitcoin went over and above forty-four thousand and six hundred dollar mark. And the other altcoins were trading at average and decent gains.

As the digital currency is very volatile the decrease or increase in prices will not guarantee a long term reversal:

Bitcoin went above the thirty-four thousand dollar mark in Jan this year however it was significantly less as compared to the peak in November 2021, where it was trading at sixty-eight thousand dollars. Given the fact that the crypto currency is very volatile, the decrease or increase in prices will not guarantee a long-term reversal. The crypto currency and blockchain experts feel that the crypto investors have to deal with this in the future.

The management adds ten thousand Billion dollars’ worth of Bitcoin to their project reserves:

As a result of the price hike in the past 1 month, Terra (LUNA) is now famous the world over. The act of the management to add ten thousand Billion dollars’ worth of Bitcoin to their project reserves, they believe that might create a new monetary era for the Bitcoin standard. The investment raise of four hundred and fifty million dollars, by ConsenSys (Metamask wallet’s parent company), was raised in a Series D funding round led by the ParaFi capital. And now the company is valued at seven Billion dollars. This funding will be used for growth through the product suite. And this funding will be used to roll out a plugin extensibility system.

Metaverse gains further investment from AXP, HSBC, and Meta. And Meta plans to bring NFTs to Instagram. Meta is Instagram’s and Facebook parent company. After the investment of the IMA financial group and JPMorgan, in the metaverse, (AXP) American Express has also sought an entry into the metaverse. AXP filed trademark applications for its logos and items. American Express is very much interested in virtual payments and business transactions for digital media and NFT (Non-Fungible Tokens).

The process of acquiring virtual real estate, in the Sandbox Metaverse, by HSBC, is a small component of the large partnership with Sandbox:

The process of acquiring virtual real estate, in the Sandbox Metaverse, by HSBC, is a small component of the large partnership with Sandbox for engaging with the eSports’ fans. This HSBC investment adds it to the list of other big companies like Warner Music Group, Gucci, and Adidas. Below are the best and the worst performing cryptos in the last week.

Top 5 gainers in this week:

Top 5 losers for the week: 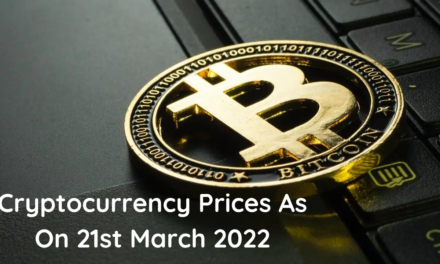 Cryptocurrency Prices As On 21st March 2022